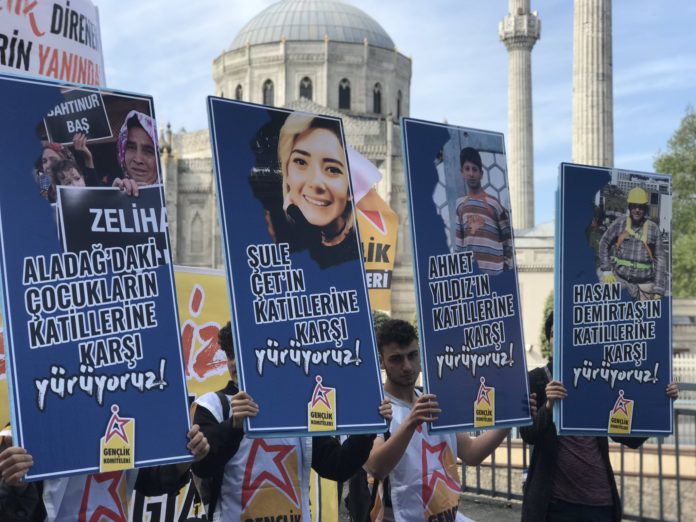 Gençlik Komiteleri, the youth communication, solidarity and struggle network, have been subjected to an intense attack by the security, Public Prosecution, pro-media and social media ak-trolls directly at the behest of the political power for about 2 weeks. The attack was first carried out on April 1 by the ‘We don’t pay movement’ during the #Wedon’tpay TT run, and they tried to hack of our social media accounts but they couldn’t take over our social media accounts . Subsequently, ak-trolls on various social media channels attempted to associate our activity with ‘FETÖ,’ but-as they would have done a little research into our past – this slander was quickly withdrawn by them. On the night of April 8, our paralegal friend Yağız Timocin was detained from his home. On 2 April, we learned that the investigation file was prepared so hurriedly and with an instruction from above that Yağız was asked nothing about his personal social media sharing, which was stated as ‘inciting hatred and hostility to the public by citing #Ödemeyapmiyoruz shares on social media’. On 10 April, our friend was released from overseas due to ‘reasons’ not even found in the investigation file. On the same day, efforts to criminalize and target our activities and our members were continued in the “news”, which was prepared with clear instructions by a copy-paste method from the police record on the website of Hürriyet newspaper. Today, three of our friends who were in the investigation file were arbitrarily detained despite the fact that there was no legal reason for detention from the prosecutor’s office, where they were called to testify.

The People’s Alliance, who explained that they will spend 100 billion liras for bosses but will starve the workers with free leave, is stuck in the corner with the anger and reality of millions of people. This reality; with the monthly income and continuous debts, the effort to sustain the lives of millions who sustain themselves only… This anger; The regime, which has so far divide the society as conservatives and secularists and tried to rule, has become more clear in millions that the power of the bosses and  bosses are the the only man… Here, the political power trying to cover up the internal disintegration and impotence that will be caused by such a jam is trying to scare and intimidate the whole society through the attacks on Gençlik Komiteleri. It draws its limits on the opposition; it is desired to prevent coming together with their reality, their behavior, their emotions. They think that by criminalizing the Gençlik Komiteleri, they will reduce the anti-authoritarian and libertarian voice of the youth against the one-man regime.

These are futile because Gençlik Komiteleri are a network where hundreds of young people have direct labor. The prase, “Youth’s communication, solidarity, struggle network” is not fudge. It is the product of a collective effort built with numerous experiences regarding the problems and solution opportunities of youth. For see this, it is enough to look only at the “Student Forum”, which was created by hundreds of young people on 8 December 2019, and the “University Exchange Program”, which was prepared by concentrating on the concrete problems of universities.
These are futile because Gençlik Komiteleri strive to be there wherever there is an injustice young person. It exists to improve young’s ability to struggle. As long as it exists, it will continue to exist in various forms and shapes without aiming itself in accordance with the “principles and objectives” that it explicitly states on its website (http://genclikkomiteler.org/2019/12/ilkeler-and-amaclar/).
These are futile because Gençlik Komiteleri are economically/ politically / ideologically independent of the capital and the state, of the imperialist centers. It knows the international creative and destructive power of youth and leans on this. It is self-competent, independent of order. It is self-competent, independent of order. It builds solidarity relations with all segments oppressed in the face of the order, especially the youth segments. During the coronavirus epidemic, #KoronaRaporum publications from all over the world to convey scientific information to the public are recently, concrete examples of this.
These are futile Gençlik Komiteleri know the order they are struggling and its builds: It does not underestimate or magnify. It derives its strength from all this reality and legitimacy mentioned above.

Instead of the epilogue: Extraordinary Force

Let us respond with the famous motto of the women’s movement against the attacks of criminalizing our activities for about 2 weeks, citing the “social media posts” of the political power: “We are not silent, we are not afraid, we are not obedient!” We will continue to walk the way which we know correctly. We will work ceaselessly to grasp the current political trend of the workers and turn it into an anti-order material force. Our promise; we will work with extraordinary energy, effort and devotion to build an extraordinary counter-force in an extraordinary period. We would be honored to see every young person who wants to be a partner to this effort more or less.
We have not said our epilogue yet.